I’ve been given the fantastic opportunity through the London Art College to try out Derwents new Graphic Pencil range and how excited I am! The package dropped through the post and I couldn’t wait to start using them. First things first, whats in the package? Well I’m delighted to find 3 tins of 12 pencils, ranging from 9H to 9B. Just the pictures on the front are enough to inspire me!

Giddy head and childish excitement aside I now had to think of what to do. I decided to combine a couple of jobs into one. I needed to complete another picture for the London Art College Pet Portrait Course as well as do something for this, so……Lion got chosen! (I know, it’s not exactly a pet but it just a big cat and some artistic licence is allowed.)

The piece is 10 x 12 inch on Daler Rowney Mixed Media paper. The graphite pencils I already have are Derwent 24’s so I was interested to see how different or similar these would be in comparison. 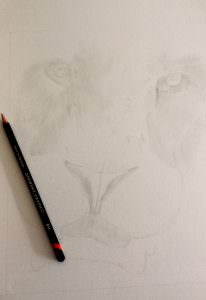 I started by adding a base layer using the 8H pencil. At first I was dubious of this – the 24’s H range can leave dents in the paper if used with a little too much enthusiasm (and I can be quite heavy handed) however, even with the 8H I can feel how soft these pencils will be. Whether thats a good thing I honestly don’t know but what it meant was the under layer could be put down and then easily removed or blended. The graphite seemed to flow onto the paper with such ease and with just a little extra pressure the tonal range in this one pencil alone was easy to see. 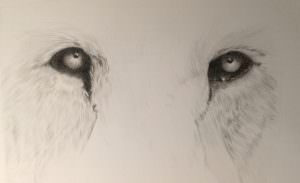 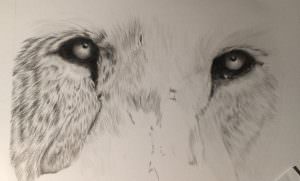 Now to start building the darker tones. As I mentioned, the 8H was so soft it led me to believe the B range was going to be awesome for the deep shades. I wasn’t disappointed! I built up these tones with a 2B, 3B and 4B. Each had it’s own quality, some were better for fur some better for shaded tone, but all were smooth to lay down. What was a 9B going to offer?! 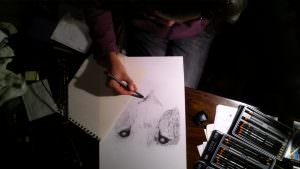 For the fur, I preferred to use the 2B as a starter, the 4/5B for the darker single strokes and then a final layer of the 4H to give some definition. The more I progressed through the B range the grainier the texture and tone seemed to be. Now that might be to do with the paper I am using which is quite textured, and maybe my pencils needed sharpening a little more than I was doing, but I would like to try these on a smooth paper and see how they work. 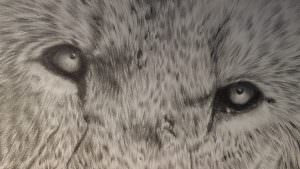 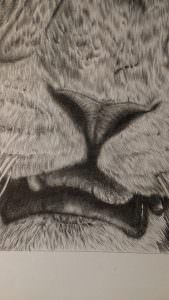 I know I have plenty to learn when it comes to both drawing techniques and choosing materials but I would definitely recommend these pencils. They seem to glide onto the paper with such ease, lay down a great range of tone, but are also easily removed, even when laid on fairly heavy. I used a basic pencil sharpener and didn’t have any snap on me either as I have had with previous pencils and the more I used these the easier it was to pick certain ones for specific jobs.