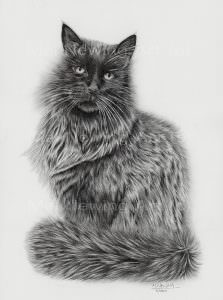 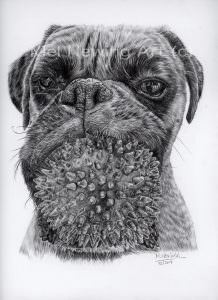 So the last time I wrote about the Derwent Graphic pencil range was after completing my Lion drawing.  This time I have 2 pictures which I would like to talk about,  “Thomas” the cat and “Boxer with Toy“.

Thomas is a commissioned pet portrait drawn on Daler Rowney Mixed Media paper.  Boxer with Toy is a piece for London Art College and I decided to use Arches Hot Pressed Paper for the first time.

Both of these pieces are much darker in tone in comparison to the Lion so I used a wider range of the B pencils.  I found the best pencil for the initial outline was 4H, slightly darker in tone to the 8H for the lion and a little easier to see in my opinion.  Still as easy to lay down and pick up again with my putty eraser though. 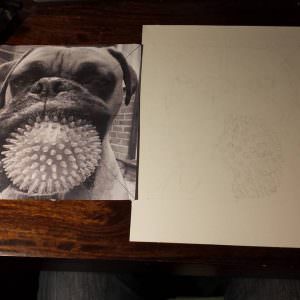 The pencils laid down really well onto both of these papers.  The mixed media paper has a rougher texture which for some pencils, I have found, means they don’t blend out too easily.  What I like about these pencils is they are really good for blending, especially as you move up the B range.  I use a bamboo clothe to smudge it and they blend great.  I prefer this for larger areas and the tortillions for more specific areas. 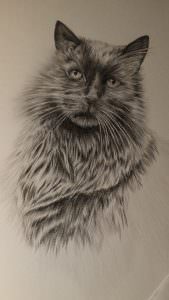 The only downside to something that blends easy – you have to be careful about accidentally smudging!  Keep that drawing hand on a clean piece of paper placed over your drawing and make sure it doesn’t move about too much.  Any residue it picks up will spread over the rest of the drawing paper.  However, because they are so easy to rub off it’s not a major issue, just a little annoying.

This time I had a breakage with the 8B pencil whilst sharpening it.  Damn!

I may have mentioned before that I purchased a Swordfish sharpener which has made a massive difference to the point I can get on all my pencils. With the graphites there is an automatic “stop” so it shouldn’t over-do it and break the point, with the pastels it will just keep going!!  I think I must have dropped the 8B at some point as it was the only one to keep breaking.  Not sure, but will have to keep this in mind for the next piece. 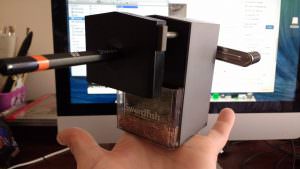 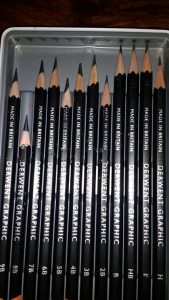 With both these pieces I made quite a number of changes from the first step all the way until the end.  It’s been awkward in the past to be able to undo mistakes at the end of a picture.  Now I’m not saying you can delete major changes – I couldn’t delete half the face or a whole eye! – but I could certainly do more than with previous pencils.  For example, Thomas’s tail wasn’t quite right.  I’d made it a little too bushy.  Not a problem – I could take it back and easily update it without too many issues. 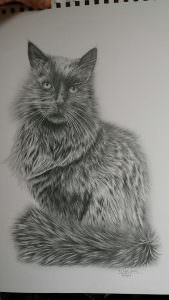 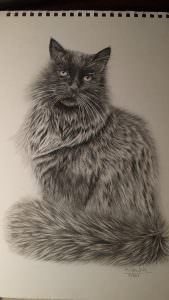 The ball in the boxer picture was too dark also, which meant I was losing the spikes against the background.  Not a problem!  Putty eraser to the rescue and small dabs brought the graphite out just enough to show a little more detail.  As I’ve mentioned, not major changes but little bits that I found more difficult with previous graphite pencils. 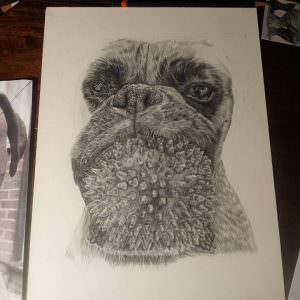 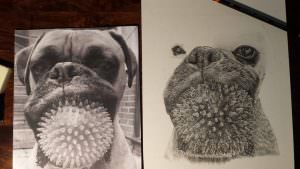 For the finer fur detail, even on the darker sections, the 4H/2H were what I found worked to give the definition.  When a darker undertone is laid down, the harder pencil seems to do a lovely job of defining it and kind of smudging it out a little.  It’s hard to explain but the harder pencil over the softer works really nicely in getting that detail.

And I am finding it hard to find more con’s!  That’s got to be a good thing no?!